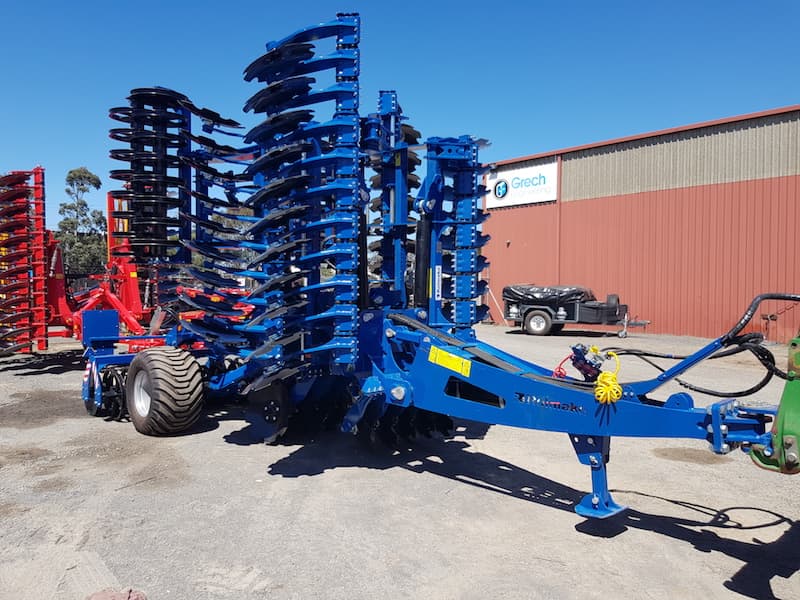 A new tillage product is now available in Australia, from a company that already enjoys great success in the UK, Germany and greater Europe. Rolmako is a farm machinery manufacturer from Poland that builds a wide range of heavy duty tillage equipment. This brand has now become available nationally through OzValue AG Australia.

While OzValue AG currently manufacture and import many types of farm machines, they continue to search for additional quality products that are well suited to Australian conditions to add to their line up. As part of this ongoing search, a team of representatives ventured to Europe to meet the management team and view the Rolmako manufacturing plant in Wrzenia Poland. At the time, they considered this visit somewhat of a gamble. However, after a few of days discussing both businesses and touring the extensive factory, they were supremely impressed with both Rolmako’s processes and attention to detail. We’re told the Australian contingent were also impressed with Polish Vodka.

Rolmako offer many different machines, but the U671 Pro was chosen for its suitability to the Australian market. Last year OzValue AG received its first shipment of these machines, with the first being immediately sent to work in South Australia, New South Wales and Victoria. Those very first machines completing over 2000 acres of work already.

Feedback from these first customers has been overwhelmingly positive. Terry Blanch from Tamworth NSW purchased the unit based on his needs of stubble cultivation, seed bed preparation, and to chop out flea bane. Terry actually sent OzValue AG a video showing just how well the Rolmako U671 Pro had cut out some pretty advanced flea bane, you can view this video at ozvalueag.com.au.

More recently in August 2018, at Skipton, Keiran Molloy put his machine to work. Being in the depths of a Victorian winter, Mitch Blackmore – Sales Manager at OzValue AG offered to help out in getting the machine set up for the job, but expressed some reservation at the time about the conditions, with the sticky clay soils not being ideal.

“However I was super impressed, the machine was able to work well in the damp conditions, I had some concerns with the roller filling with mud and stopping us from working but it continued to turn freely. It handled the conditions really well, and if time allowed a slightly drier paddock would have produced a better finish again.

The paddock we were in was a pasture paddock that had been grazed and sprayed out. Kiernan was keen to create a seed bed to sow more feed into with the machine set on its shallow setting and dug 3-4 inches producing a full width of cut loose soil. There was no ridging under the ground and the job was very consistent.

The Rolmako machine weighs just under 8 tonnes in this configuration which for this kind of cultivation is more than enough. Kiernan also has some flat Phaliris country which will require all the weight to produce a good job.

Unlike other speed discs the weight and 620mm disc size allows for this machine to undertake primary tillage as well as your more traditional purpose of stubble cultivation.

I believe the Rolmako U671 is the pick of the speed disc options especially if you are looking for a machine to cultivate new ground as well as stubble cultivation and chop out weeds such as flea bane.” said Mitch.

The headline specs of the Rolmako U671 Pro are its 6 metre working width folding to 3 metres for transport. 620mm OFAS hardened steel discs, quality SKF Agri-Hub bearings, and a very attractive price.

Very few of these machines are currently in stock, but a new shipment is arriving shortly.

To secure yours, OzValue AG suggest viewing the quality and discussing the suitability of this machine with them by phone or online anytime.