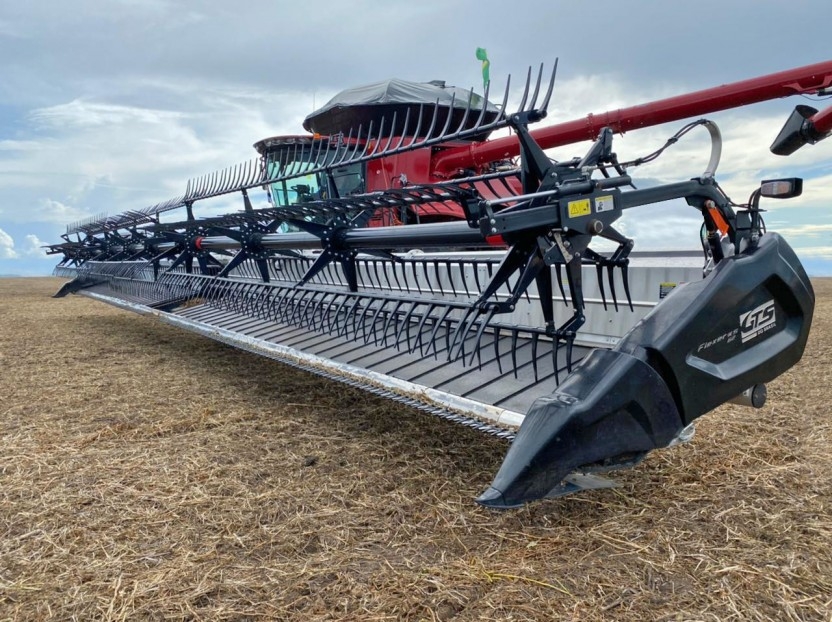 A NEW-LOOK header front from South America has landed in Australia and will be put through its paces at an introductory in-paddock demonstration next month.

The GTS Flexer XS front, manufactured by GTS do Brasil, will be imported and distributed exclusively by Oz Value Ag Machinery, a company based in Ballarat with branches in Kingaroy (Qld) and Wagga Wagga in NSW.

Founded in 2000, GTS do Brasil has been a pioneer in the development of corn harvesting platforms using aluminium in the build.

Oz Value Ag sales manager Mitch Blackmore said the first machine to arrive – a 40-footer – was delivered in September, with another expected shortly.

“It’s the smallest of the aluminium builds, with the units below that made only in steel.

“We’d dealt previously with GTS for their graders and land-levelling equipment and were highly impressed with the quality we were seeing, so started looking at other products in their range and thought there could be an opening in the market for another flex front, considering farmers have only a couple of other options at the moment.

“Also, the fact that the GTS machines go up to 50 and 60-foot puts them in the fore-front of the competition.

“We’ve shown the unit we have in the yard to a number of customers now for feedback and lined up a couple of farmers for demos this season in the Mallee.

“One grower in the Birchip area who’s keen to help will have a lentil crop to harvest, but the unit would also work for chickpeas.

“Being a flex front with a number of pivot points and fully flexible cutter bar, the ground-following ability means it’s ideal for anything needing to be harvested with the header right on the ground.

“Being a draper front, though, it can still do wheat and barley as well.

“These can really only fit on modern combines, the main limitation being the size of the feeder house.

“GTS only offers them for late-model headers, such as flagship Case, John Deere and New Holland machines of Class 7 or bigger.”

The SpringFlex flotation system incorporates sensors to “read” the ground with spring tension adjustable as needed, while flip-over reels in three sections allow the operator the possibility of adjusting the reel pick-up fingers in seven positions.

The cutter bar used is the EasyCut system from Schumacher, with blades and rollers placed alternately to help with stability.

The angle of attack is adjusted hydraulically from the driver’s seat, with the bar able to float up to 200mm to adapt to the irregularities of the terrain.

“Our thinking is to have one at Wimmera field days next March, but people can come to our planned demos later this year or see it in action on our own property in the Ballarat area,” Mr Blackmore said.

Click here to learn more about the GTS Flexer XS